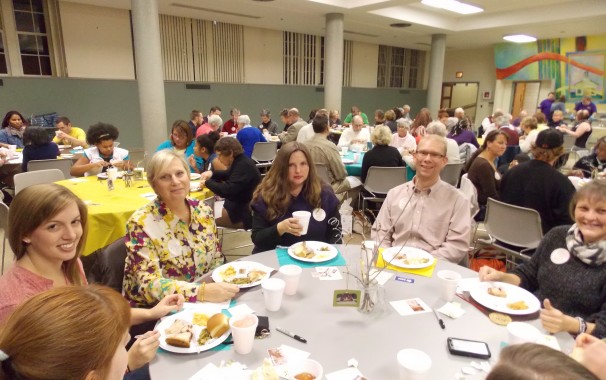 MUNCIE, IN – It has been said, “Habitat for Humanity is a perpetual motion miracle: everyone who receives, gives—and everyone who gives, receives. If you want to live complacent and uninspired, stay away from Habitat; come close to Habitat and it will change you, and make you part of something that changes the world.”

Jena Ashby, Program Director, thanked all those in attendance who have decided that living in complacent, uninspired life is not for them!  “This time of year we want to especially recognize those who regularly make Habitat for Humanity a part of their life. We are so grateful for their service to our organization” Ashby said.

Muncie Habitat for Humanity was formed in 1986 to serve families in Delaware County with housing and homeownership opportunities.  Muncie Habitat – in partnership with 1,000’s of volunteers and donors – has served over 110 families with housing during its first 27 years.  Muncie Habitat for Humanity provides housing solutions through construction of new homes with sustainable building practices, rehabilitation of vacant and foreclosed homes, and through repair of existing homes (A Brush with Kindness program).