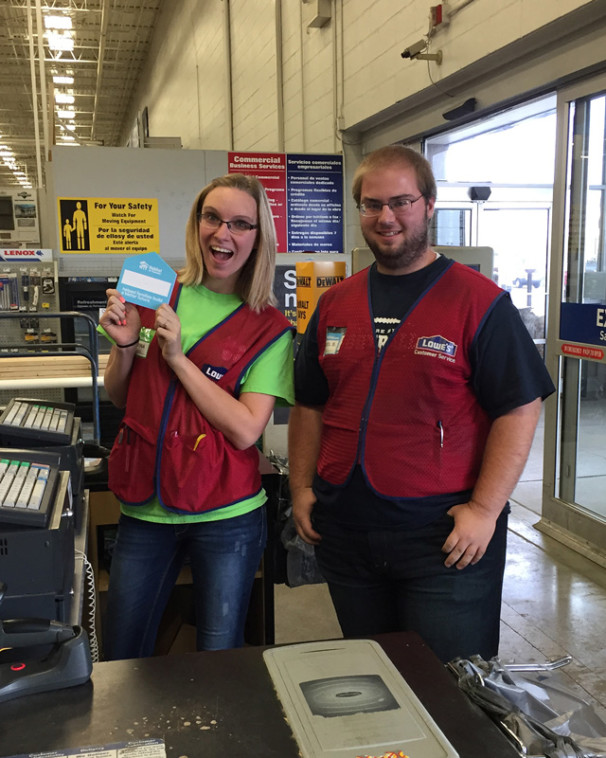 To build on the deep foundation of our Lowe’s partnership, the first Lowe’s store fundraising campaign to support Habitat for Humanity took place April 28 – May 31, 2016. Muncie Habitat for Humanity was one of 95 affiliates to participate in this first year program in 10 Lowe’s markets. In these ten markets, selected by Lowe’s, shoppers were asked if they would like to donate $1/$5/$20 to Habitat for Humanity upon check-out.

Lowe’s awarded $1.5 million in grants to 19 Habitat for Humanity organizations across the country to support more than 400 community projects as part of Habitat’s Neighborhood Revitalization program, an effort to serve more families through community development partnerships.

Locally, Muncie Habitat received a $70,000 award to support the neighborhood revitalization efforts the 8Twelve Coalition has sparked. This award will be invested in the target area in 2016.

In addition to the grant, Lowe’s Heroes employee volunteers will be among more than 50 volunteers to join forces with Muncie Habitat for Humanity on July 22 & 23, 2016 to work alongside residents in the neighborhood revitalization area.

As the underwriter of Habitat’s Women Build® program since 2004, Lowe’s has brought women from all walks of life together to support the nationwide initiative that challenges women to devote at least one day to help eliminate poverty housing. Lowe’s how-to clinics have put hammers in the hands of thousands of women, teaching them construction skills and empowering them to be part of the solution by building homes with partner families.

In September and October, Women Build volunteers will build a new construction home in the 8Twelve Coalition area at the corner of 9th and Elm Streets. Twelve teams, each consisting of 15 women, will help to raise a portion of the funds for the house, and will volunteer one day alongside Clarence & Dawn Alexander to build their new home. Brenda Tharpe, Store Manager of Muncie Lowe’s, will lead one of these Women Build teams.